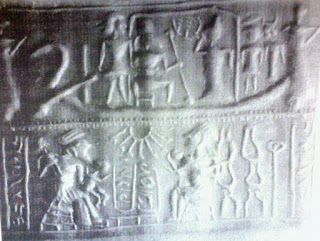 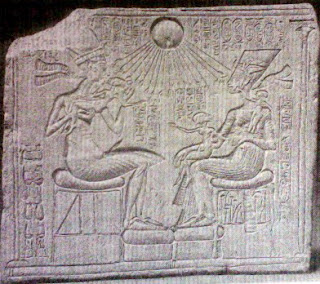 The remarkable little object we see at the top is a cylinder stamp or seal (the photograph shows an imprint of its features), apparently emanating from somewhere in Phoenicia, possibly Byblos (Gubla), and published by Giovanni Garbini (now deceased); he recognized two striking features: it imitates the family portrait of Pharaoh Akhenaton and Queen Nefertiti, with their three daughters (Egyptian Museum, Berlin, 14145), and it has inscriptions in the West Semitic syllabic script (whereas the Egyptian counterpart has hieroglyphic writing). Since Akhenaton reigned in the middle of the fourteenth century before the current era (BCE), the Semitic artefact could not be earlier than that. One typical detail in each image is the sun disc (Aton) with its rays having hands to distribute its benefits, which are celebrated in the Hymn to the Aton.
Notice that the Phoenician image is reversed: the personage corresponding to Nefertiti (who is holding two children) is on the left side of the photograph, and the father (with one daughter) is on the right. It is not clear that the Semitic couple are meant to be Akhenaton and Nefertiti; the headdresses are not the same as those on the Egyptian royals. On the plaque the names of the Egyptian family members are recorded in hieroglyphs in columns and cartouches: the daughters are Meritaten, Meketaten, and Ankhesenpaaten; Tutankhaten (later King Tutankhamen, not a child of Nefertiti) is not in the picture. One suggestion is that the three columns of Semitic text provide the daughters' names (Michael Mäder), and this would assist us in deciphering this script.
However, this is not the result we get when we apply the system of decipherment proposed by George Mendenhall in 1985, and adopted and adapted by myself as the West Semitic logo-syllabary.
This exercise will be undertaken with the aid of a model prepared by Mäder. 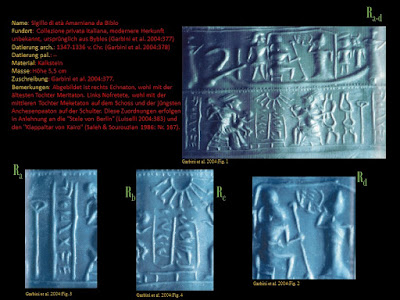 Michael Mäder (University of Bern, personal communication) sets forth a prima facie case of circumstantial evidence, which is very attractive. This is an edited version of his statements (the original is reproduced at the end of this essay).
On the Egyptian Familenstele Berlin, 14145 (Krauss 1991) there are three inscriptions which include the names Meketaton, Meritaton and Ankhesen-pa-Amun.
On the Semitic seal, likewise, there are three short texts in corresponding positions, adjacent to the three daughters.
The names  would be read in Egyptian: Meritaton on the legs of father, Meketaton on legs of mother, Ankhesen-pa-Amun on shoulder of mother.
They have the same relative extension, i.e. Meketaton and Meritaton short, Ankhesen-pa-Amun longer.
The two shorter ones begin with the same syllable (me) and end with the same (ATON [Egyptogram]).
In the longest of the names, Ankhesen-pa-Amun, has the expected syllable pa in its 4th position.
The 4th sign in the Byblos version has the form of a cross or "bird with outspread wings". This suits the fact that pa in Egyptian syllabic writing has the form of a cross (originating from a bird with outspread wings).
The sign in the shape of a "2" would be me (in Meketaton and Meritaton)

The fact that one of the "2"-shaped signs is mirrored fits the Egyptian names which also are mirrored, see Krauss 1991:11.  (It was a habit of Egyptian scribes to place the signs in the same direction as the faces of the persons they describe are heading.)
This is certainly an impressive set of arguments.
In response, we might first ask: If the names of the personages on the seal were given, would it not be the King (Akhenaton) and the Queen (Nefertiti) who were named, rather than the children? The royal couple were the intermediaries between the Sun-deity and humans. If this was a personal seal, the name of its owner might be present.
Second, if the initial signs of the two M...Aton sisters are supposedly mirrored, or rather the signs are facing the depiction of the person who is named, according to the Egyptian convention, I would have to say that these "2" letters are not the same; and the one on the left is actually the second letter in the sequence.
And the signs at the bottom of the cartouches are similar but not the same; they are supposed to represent the Aton, the disc of the sun. The sun-sign in this West Semitic syllabary is found in the long text, in second position: a circle with a dot in it (equivalent to Egyptian hieroglyph N5).
The proposed form Ankhesen-pa-Amun for the third sister comes as a surprise, but it can be validated: as noted above, Tutankhaten became Tutankhamen, when worship of the Aton was abandoned, and the same principle applies to Ankhesen-pa-aten; but I can not see her name on this cylinder seal. Incidentally, the Egyptian Ankh sign, representing "life", has a place in the West Semitic syllabary, as H.I (h.iwatu, life). It does not appear in these inscriptions, though it could perhaps have been used as logogram in her name.

Hence, I do not see this document as naming the children, but think it might relate to the boat in the upper half: solar barque, ship of the dead? The idea that a justified dead person could travel with the Sun in his ship?.

NUSHI`U "saved"
HLL "Celebrate"
NIKAWANA "he is established"
This reminds me of the Egyptian Book of the Dead, with the deceased passing through the hall of judgement and emerging "justified of voice" (his claim to be innocent has been accepted by the divine judges).


Here is the interpretation of Michael Mäder (University of Bern); he is forceful in his presentation, but he does not have a signary for the script (which he considers to be undeciphered, and after rejecting my solution he is determined to crack its code, following possible clues on this cylinder seal):


"- As on the Byblos seal, also on the Familenstele Berlin, 14145, there are three inscriptions which depict the names Meketaton, Meritaton and Ankhesen-pa-Amun.


- They are positioned at the exact same places respectively.


- The names without doubt read in Egyptian: Meritaton on the legs of father, Meketaton on legs of mother, Ankhesen-pa-Amun on shoulder of mother. (This is important, because when the Reader reads your blog he thinks this would be just a theory...)


- The longer one is the only one which ends on a different syllable, a fact which would fit to the (later) different ending of Ankhesen-pa-Amun (AMUN? not Aton? BEC)


- Based on these considerations Michael Mäder (University of Bern, personal information) suggests the reading of the two respective Byblos signs as me and pa: me is the sign in the shape of a "2", and pa is the sign in the shape of a cross.
- The fact that one of the "2"-shaped signs is mirrored fits to the Egyptian names which also are mirrored, see Krauss 1991:11.  (It was a habit of Egyptian scribes to place the signs in the same direction as the faces of the persons they describe are heading.)"