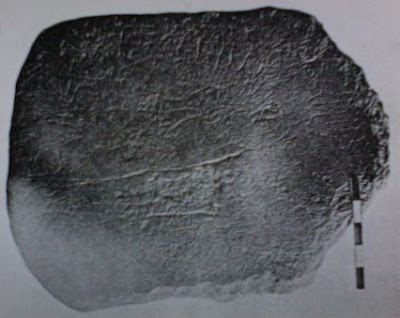 This is another interesting stone from the Sinai turquoise mines. It was found during excavations in Mine M, close to the obituary inscription of Asa (358), together with the rations plaque (375) and other inscribed objects (Starr and Butin 1936, 20-26). Starr described it as made of local sandstone (22, innocently followed by Colless 1990, 43), but Gordon Hamilton (2006, 375) says that it is hard stone, probably limestone. It was in a dump in Bay 1 of the mine, "not over 30 cm. below the top of the fill" (Starr, 22); so Sass (Table 1), "Dump in Mine M"; but Hamilton has the dump outside. In attempting to read the text on it I am struck by the occurrence (in Starr's account) of such terms as "debris", "refuse", "mine chips", "bits of turquoise". I think I can perhaps detect a word for "gravel" (h.s.) at the top, and "scrapings" (sh.) at the bottom.

The photograph reproduced above is the one provided by Starr and Butin in 1936; it is unsatisfactory, as the writing on the lower left section is not visible, and the rest is barely discernible; it led me into deep error, and my 1990 published attempt at reading it is worthless. 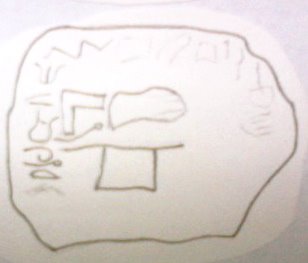 Now with two new photographs, released by Gordon Hamilton (with Marcel Marée, Marilyn Lundberg, and Bruce Zuckerman; 2007, MAARAV, 14.1, p 126-127, pl VI and VII) and a better description of the object, I can try again.

Lundberg and Zuckerman have put eight clear photographs of the object on the internet: four coloured, four monochrome. To gain access to these and photographs of other ancient texts, we go to the wonderful database of their West Semitic Research Project, and request Sinai 375a:
INSCRIPTIFACT (http://www.inscriptifact.com/)

Each photograph helps to identify the details of particular characters in the text, such as the cross in the middle of the stone, which does not always appear with all its four pieces standing out clearly. With the aid of these pictures, I can see most of the letters on the old photograph, but the lower left corner was blank.

Nevertheless, everyone admits it is not easy to determine exactly what the faintly incised letters might be. Hamilton's drawing (2006, 374; 2007, 33) is instructive but not perfect. My own sketch adds and subtracts a few speculative details in the obscure areas.

An interesting feature of the stone is the animal depicted on the other side. Hamilton (2006, 375) describes it as a jackal, or the Seth animal (2007, 33). (I have pondered over the origin of that mythical beast myself; its snout reminds me of an aardvark, or an anteater; or its destructive nature suggests a connection with the locust.) I think the letters in the column on the left side of the inscription refer to this creature (the word for 'jackal' can be found there). 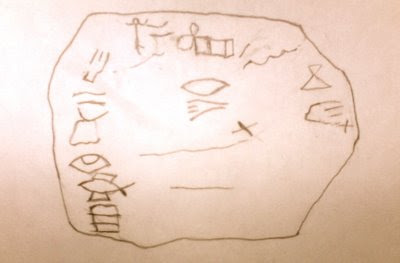 Dh ( two parallel horizontal lines: = )
' ('alep, ox-head)
` (`ayin, eye)
S (fish; Hamilton follows the erroneous line that the fish is D)
Hh (H., a house with two rooms and a yard, representing h.az.ir 'court, mansion'; there is another instance at the top of the stone; the courtyard can be rounded, and the one in the corner seems to have a bent line at the top; the two rooms can be adjacent with the yard section covering both; here the rooms and yard are all in parallel, in both cases).

Note that Hamilton wants to turn the 'western' end of the long line in the middle into a snake, hence N (I do not show it extended so far but it does apparently pass right between the ox-head and the eye.

My reading would be (with the words separated):

The jackal (deified as Anubis in Egypt) was the guardian of tombs and bodies; he had a leading role in the mummification process. The irony is that he is assigned a protective status, because he frequented tombs, but his reason for being there was different and not nice. I will suppose that the jackal here guards the turquoise that has been mined, and also the tailings, which may include pieces of the precious mineral.

The stone would thus have a magical purpose; the image of the jackal would protect the mined turquoise from looters (or else they had a real-live domesticated jackal there!). Elsewhere in the inscriptions, the equipment of the expedition is put under the aegis of the goddess, as being "loved by Ba`alat" (351, 352, 353, 374).

The top line of writing could be seen as (reading from the right):
Hh (H., made up of three sections, like the Hh in the bottom corner)
Ss (S., a tied bag), not certain
Dh (two horizontal strokes)
H (apparently a stick figure of a person rejoicing)
N (a faint snake)
K (an upright hand)

However, there is a stroke to the right of the Hh, and Hamilton has constructed a Tt around it (a cross within a circle, as in the Phoenician alphabet). I have doubts about seeing this sign here or anywhere else in proto-alphabetic writing in the Bronze Age (before 1200 BCE), and this is the only example Hamilton can point to. The original form was a cross outside a circle: +-o (see the section on Tt here).

As I intimated at the outset, the combination HhSs could be the word for gravel or pebbles (root h.s.s. 'cut up, divide'), or a word for 'exterior', or 'partition" (dividing wall).

The sequence HNK might be a demonstrative adverb (cp Arabic hunaka 'there'), or an interjection calling for attention to what follows: 'Behold' (or 'Beware!'), pointing to the guardian jackal (Look out! This is the jackal guarding the heap of scrapings).

With regard to our quest for the various letters of the alphabet, an important feature of this text is the presence of Dh (here) and Z (immediately opposite, on the far right of the stone). In the Phoenician alphabet dh (d) will coalesce with z. Z is a pair of triangles (|><|), which I take to be manacles or fetters, for which the word is ziqqu, hence Z. This is the only occurrence of Z in the Sinai inscriptions, and I had not noticed it till Gordon Hamilton pointed it out (though he understands it as an ax with a handle). If you look at our Roman Z you can see that one of its diagonal lines has been omitted along the way; actually it did not happen like that; it became |-| (turn it round horizontally) and the middle line became diagonal to allow the character to be written in one movement: |\| > Z .

Another instance of this Z is found on an inscription from Thebes in southern Egypt: it has Dh and Z, and the term zqq ('refine') with reference to refining gold (where the Q is --o-, a cord or 'line' wound on a stick, qaw, not the monkey that the Hebrew name Qop suggests, and Gordon Hamilton unwisely accepts). Notice the two dots indicating 'double Q'. Also significant is the P, a human mouth (in the word pd, 'pure gold'). We must reject Hamilton's unhelpful remarks (2006: 187-191) about 'false derivation' of Pê from 'mouth', invoking what he thinks are 'some forms of `ayin without pupils'; here on the Sinai document the mouth and the eye are clearly distinguished by a pupil in the eye. Hamilton is supporting the discredited derivation of P from 'corner of a wall', erroneously using boomerangs  for this purpose, instead of for G (gamlu, 'throwstick'). 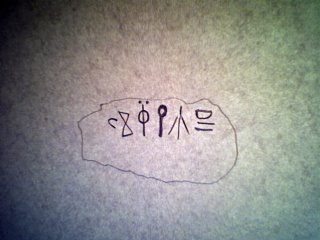 The Z on the Sinai stone has a hand (K) below it, and a cross (T). This could be zaku, meaning 'pure', a word that can be applied to minerals (one problem is that while Hebrew and Akkadian have Z  in this root, Old South Arabic has Dh, and Aramaic has D, but Arabic has both Z and Dh, so we can accept Z here); in this instance it has the feminine marker -t, and if it is an adjective there should be a noun to go with it. Could it be describing a word for 'turquoise', which has not been discovered in these inscriptions, yet?

To my eyes a central column is present, between the columns on the left and right sides, and below the top line. It is not constituted by the two characters that Hamilton conjectures. He joins the two signs that I see as a mouth above a hand, to make a unit (as I did in 1990, to produce a hand, K), which he understands as a fish, and reads it (erroneously) as D, though it is nothing like the fish in the left column, which has two fins and a tail; he takes the long horizontal line below that as significant (as I did in 1990, combining it with the parallel stroke below it to make a door, hence D, and this remains a possibility), and taking it with one of the angles of the X (actually the letter T) to make a long snake (N).

Notice that the P ("mouth") is clearly distinguished from the `ayin by the pupil in the eye.

The Egyptian word for turquoise (mfk3.t ) is found (damaged) on the bilingual sphinx (S351). The simpler form is mfkt, and I see it here as a borrowed word in the sequence mpkt, followed by zkt, "pure", hence "pure turquoise".

Accordingly, the writing on the left side of the stone is a warning: Beware of the jackal guarding the scrapings. Further to the right is the label: Pure turquoise. The top line remains obscure to me, but it might be the general identification of the place where the material from the mine was deposited (the 'dump' mentioned by the archaeologists).

The top line may contain another missing term, namely a word for "miner" or "stonecutter". The Middle Kingdom Egyptian inscriptions from Sinai speak of "stonecutters" alongside "coppersmiths".
By recognizing a square house to the left of the Sadey, we have a sequence H. S. B, and that root means "hew". One reference in the Bible (Deuteronomy 8:9) speaks of mining copper out of hills, and this corresponds to the manner of mining turquoise.
If this removes the HNK as the warning exclamation, even the K could serve this purpose (Hebrew ko) as saying "Here is the jackal".

In his book on the origin of the alphabet, Douglas Petrovich (2016) includes this among his ten New Kingdom inscriptions from Sinai (alongside five from the Middle Kingdom); he claims that these are all written  in the Hebrew language, rather than simply West Semitic. If he wants these texts to conform to Biblical Hebrew, with only twenty-two letters, he is in difficulty here, because in my reading (supported by Gordon Hamilton) we have Dh on the left side and Z on the right side of the plaque (but neither appear on DP's drawing). Furthermore, the "pure turquoise" (mpkt zkt) is disconcerting because of the final feminine marker, -t, which only appears in the construct state and in the plural form in classical Hebrew.

However, one salient point in his interpretation is worth taking up: the right-angle figure at the top (to which Hamilton and I have desperately added a tiny pair of legs to make it H) is understood by DP as Hieroglyph F20, a logogram or ideogram for "tongue" and for "overseer" (imy-r, "the one who is in the mouth" [of his subordinates]); Alan Gardiner (who sees it as an ox-tongue) describes this usage as "sportive", a graphic pun; in the present instance the "overseer" would be the jackal! If the Egyptian word for "turquoise" is present, then an Egyptian hieroglyph is not out of place. But how does this word relate to what follows it on the top line, reading from left to right? Three letters are possibly discernible: S.H.T, perhaps meaning "shiny things" or "gleaming things" (s.ah., "dazzling", "glowing", feminine plural), hence "The overseer of the shiny stuff, pure turquoise".

On reflection, I dare to say that my interpretation fits the context adequately.