MARKS ON A STONE WALL ON THE TEMPLE MOUNT 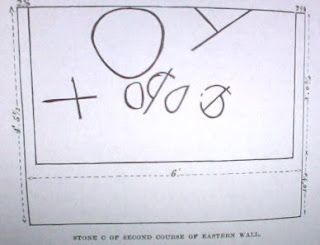 The seven characters are hard to fit into the Iron Age.

They are all different, but not sufficient for us to see the whole system and to distinguish the various letters.

I could make a case for the Bronze Age, but would this wall (or at least this stone) fit into that era?

The basis for my case is at ALPHABET AND HIEROGLYPHS

And the alphabet table at the end of that article.

Starting from the top line, reading from right to left:

P : reversed, a human head (Rosh) (See [2] R); but it has two protruding lines at the top, and this is a feature of Q in the Bronze Age; both disappear in the Iron Age.

However, in the Bronze Age the word Ss`R has ghayin (Ugaritic, also Arabic).

Reading the bottom cluster from left to right:
PR `S. ('fruit of tree')

Ss`Q means 'cry out'.
Putting the circle and the cross together:
Sh T (Hebrew shiyt, 'pit', used for pits under the Temple! M. Jastrow, Dictionary, p. 1570)

George Grena reports, concerning one of the characters: "Warren described one of the locals removing its red-paint tail". If this was the `ayin, it would produce a snake, like the one on the vertical section of the Wadi el-Hol inscription. This would give:
SsN "Sion" (Zion), with the semi-vowel y not represented (a characteristic of Bronze-Age inscriptions);
SsNR the mysterious s.innor of 2 Samuel 5:8; waterpipe?

Is this one of those warnings for diggers?
"There is (YSh) a waterpipe (SsNR) here (P)"
The + (like x) marks the spot.

There are similar mason marks at Megiddo and Samaria, described in G. R. Driver's SEMITIC WRiTING (1954) (the chapter on "The origin of the alphabet", and all his photographs, drawings, and tables, started me off on my own quest, which has now arrived at a culminating point, I like to think).

In his chapter on Alphabetic Writing, GRD includes (115-116) "masons' marks on stone" from those 3 places, and considers the  Megiddo and Samaria marks to be Iron Age Israelite, and to be letters of the Hebrew and Phoenician alphabet, and the Jerusalem marks to be the earliest;  18 examples, besides Warren's drawing (with the omission of the character I was taking to be N (snake) not `ayin (eye) after  I was told by George Grena that a tail had been rubbed out by a visitor, but Driver's drawing omits it entirely!). The two lines of other letters on his figure 67 look proto-alphabetic to me.

If this were saying the "the pipe (s.nr) should be put here", this would be an amazing discovery. I wonder whether Hershel Shanks would "buy" it.

Is there anyone out there who could falsify this in this wise: we know where the s.innor was located, and it was not near that inscription?

However,  Warren would surely have made his drawing before the visitor disfigured it, especially as he saw this "renegade Greek from Crete" do it: "putting up his finger, [he] rubbed off the tail of a Q, and it became O".  The only mark fitting this description is the central one, with a tail, which could indeed be a Q, as noted above, or it is R.

Solomon (Shelomo) is nowhere in sight, since L and M are lacking; but at a pinch we could take the three central signs as DWD, and thus discover David!
Posted by Brian Colless at 4:31 PM

"Draft - a line or border chiseled at the edge of a stone to guide the stonecutter in leveling the surfaces. Also known as a margin."

Don't forget that one of those oyins or possibly the one you interpret as a "tied bag" might have originally been a Quf, as Warren described one of the locals removing its red-paint tail. It's too bad he didn't draw it with a dotted line. Too bad we can't send Capt. Warren an E-mail requesting clarification!