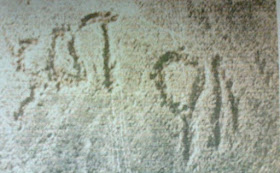 This photograph, kindly supplied by Johan Jarnæs, shows an inscription located near an old silver mine at Kongsberg in Norway. Johan Jarnæs follows the Norwegian scholar Kjell Aartun in thinking that it is the Cretan Linear A script from the Bronze Age. Sven Buchholz has also added support to the idea, and he provides excellent pictures on his website, and these must not be overlooked.

However, it is widely believed that no silver mining was done there before the Middle Ages, and if we invert the picture, and include the E-shaped engraving to the right of the letters, we might have the name of a European, ending in -LOS; or this is the initials of a name such as Lionel O'Sullivan, or Leif OlsSon. I am told that there are  in fact Kilroy-type inscriptions there, and so I would have to take these presumed Phoenician/ Canaanian examples to be exceptions, and this is reasonable. But those are three-letter acronyms of personal names (their 'initials'); this one has five letters, representing words. Incidentally, if the E is really a ship, it shows 'which way up' the writing should be read.

However. I can not see the characters in the inscription as being of the Linear A script and reading as Aartun alleges:

A summary of my research on Aegean scripts is found in the Creto-Cyprian section of:
https://sites.google.com/site/collesseum/
Now, if this inscription (as shown in the photograph above) runs from left to right (dextrograde) the first letter looks like the sign for the syllable LA in the West Semitic (Canaanian) syllabary (derived from layl 'night' and the Egyptian hieroglyph for night); and the remaining signs can be transcribed according to the same system (HU hudmu 'footstool', ZA zanabu 'tail', QA qawu 'cord wound on a stick', with QI previously unattested, but presumably from qiru 'wall'):

This is equivalent to the Hebrew hop`al infinitive (hoqtal) with the preposition la 'to'.

We find another use of that root ZQQ 'refine' (referring to gold) in a proto-alphabetic inscription from Thebes (Egypt); this consonantal inscription has the same idea, "for refining", written LZQQ (with two dots above the Q to indicate doubling)

The second Kongsberg inscription (3 metres from the other one) seems to me to be West Semitic consonantal (proto-alphabetic, not syllabic).

The word ShKh (Shin Het, 'pit') is found in the West Semitic inscriptions at the Sinai turquoise mines, at mines K and N (inscriptions 360 and 361):

A drawing of a tied bag, possibly a goatskin water-bag, would indicate where the water-bottles were kept.

And here is another interesting picture with a similar connection (photograph by James E. Knirk) 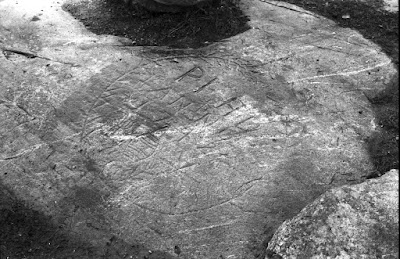 First notice the inscription in Roman letters (and Latin language):
PI AD  ANNO 1742
The PI might be the writer's initals (Scandinavian Peter John[son]?)
AD ought to be Anno Domini ('in the year of the Lord') but this would possibly make the following ANNO superfluous, and so it might be the initials of the beloved. By the way, the two forms of A are different. Is this significant? Two scribes?
Now notice other marks inside the circle, which are not necessarily from the same time.
With a magnifying glass, or an enlargement of the photograph (click once on it for a full-screen view for printing out), look for a striped object below the 7. A fish or a water bag. In
To the left of it find a hand with its wrist below it. In the original pictorial form of the alphabet, that would be K. Above it, and touching the AN, I can discern a fish, rather than another bag; an early sign for S. This combination, KS, produces the West Semitic word for 'cup/bowl'.
Further to the left of the hand, the strokes inside the circle make a wave pattern: this is the original M, and as logogram it says 'water', and this would be the place where drinking-water would be available, with a cup (KS), and the vessel that was there, back in the Bronze Age, would be filled from a water bag that would have been beside it.
If there was a P (a human mouth) as in the other alphabetic inscription ('silver mine') we would have KSP 'silver', but KS 'cup' is better here. (The word kasu, written in the syllabic script, appears on a metal cup found in Jamaica, mentioned below.)
The surprise for me is finding the two original icons for S (Samek) in the same place: the fish and the spine. But they are not in the same inscription.
Next, to the left of ANNO is (possibly) an inverted Egyptian `Ankh, the symbol of life; it was ZA in the Aegean syllabary, and H.I in the West Semitic syllabary (both syllabograms derived from their respective word for 'life', in Hellenic and Semitic). This would not have been inscribed there in 1742 of the current era, but in ancient times.
Moving now to the opposite side of the circle there is another fish or skin bag, only partly inside the circle.
To the left, and inside the circle, there is (possibly) a bovine head, and above it a square a square. This is a combination of ox-head and house, the original aleph-beth, or alpha beta. It makes a possible word 'ob, meaning 'skin bag', also found as a label at the Sinai turquoise mines (Sinai 359), with a water sign, to indicate it means 'water-bag'.
In this connection there is a star sign to the left of the alphabetic 'b. It has to be viewed as a wide X with the nether angle bisected by a short line, so a photograph is needed to turn the picture round: this is the WS syllabic BI, from bikitu 'weeping; the upper angle should be a curve, representing the eye; the three lower strokes are tears. (Aegean NA, from nama, is similarly a flow of tears, recognizable in its Linear A forms).
It appears to have a water sign below it. If this corresponds to proto-alphabetic 'b m ('water bag') at the Sinai mines, I would look for a 'U syllabogram: either a human ear, or a rodent with big ears; such a sign might be lurking above the BI and the bag, showing a head on a stick figure with arms and legs.
Alternatively, this could be an oblique K, a variant form and the forerunner of the Phoenician and Grecian K. If the oval-shaped figure is a fish, not a bag, then we have another scribe's KS, perhaps from a later expedition to the mine.
There are other marks that could perhaps be added to the store of symbols from the Bronze Age that surround the Roman alphabetic letters. While it is obvious that I am struggling to decipher the intended meaning of the marks, it seems clear that this was a spot where the workers expected to get a drink of water, back in the Bronze Age.

The E-shaped boat, inscribed to the right of the ZQQ ('to be refined') inscription, resembles the later Viking and Venetian vessels, and more significantly it may be compared with the Uluburun shipwreck from the Mediterranean and the Bronze Age. It was carrying a cargo of metal (copper and tin ingots).

Small but noteworthy were some amber beads of Baltic origin in the contents of the ship's hold, as well as a jar full of glass beads.

Ancient Egyptian and Mesopotamian glass beads reached Scandinavia in the Bronze Age (3400 years ago), and have been found in graves in Denmark.
https://www.sciencenews.org/article/ancient-egyptian-blue-glass-beads-reached-scandinavia
https://www.archaeology-world.com/beads-found-in-3400-year-old-nordic-graves-were-made-by-king-tuts-glassmaker/

The evidence is piling up now: 3600-year-old Swedish Axes Were Made With Copper From Cyprus;
Ancient rock carvings in Sweden evidently aren't of local boats but show ships bringing the metal from the Levant.
http://www.haaretz.com/jewish/archaeology/1.719125

I already have a collection of Canaanian (Phoenician) syllabic inscriptions from Syria-Palestine (the oldest from the Early Bronze Age), Sinai, Egypt, Trieste, Jamaica (a copper cup with an inscription including the words "a copper cup"), Puerto Rico (an astonishing collection), and here we see inscriptions and pictorial evidence from the region now known as Scandinavia (Denmark, Norway, Sweden).

It is said that the Phoenicians went to Britain (Cornwall) for tin, and it now emerges  that Mediterranean seafarers went northwards up the Atlantic Ocean as far as Scandinavia in the Bronze Age, and also westwards on the same route that Columbus took 3,000 years later.

Evidence of tin from the region of Cornwall and Devon has now come to light in Mediterrania (Haifa in the Levant, for example, 13th-12th C. BCE)
https://www.timesofisrael.com/groundbreaking-study-ancient-tin-ingots-found-in-israel-were-mined-in-england/
https://journals.plos.org/plosone/article/authors?id=10.1371/journal.pone.0218326

Posted by Brian Colless at 4:20 AM