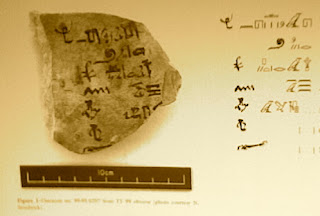 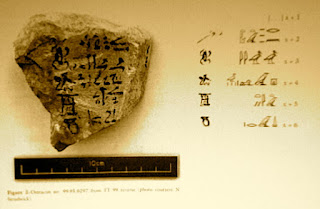 Ben Haring, Halah.am on an Ostracon of the early New Kingdom?
Journal of Near Eastern Studies, 74, 2 (2015) 189-196.
(July 2018) Other studies of the document are now available to me:
Thomas Schneider, A Double Abecedary?  Halah.am and 'Abgad on the TT999 Ostracon.
Bulletin of the American Schools of Oriental Research, 379 (2018) 103-112.
For a revised version on a pdf go to his Academia page; at the end (p. 24) you will find photographs of each side; I recommend printing them, cuttng out the pictures, and pasting them together as a useful replica of the object.
https://ubc.academia.edu/ThomasSchneider
H.-W. Fischer-Elfert, and M. Krebernik,  Zu den Buchstabennamen auf dem Halah.am-Ostrakon aus TT 99 (Grab des Sennefri). Zeitschrift für ägyptische Sprache und Altertumskunde 143 (2016) 169-176.
(November 2018)
Aren M. Wilson-Wright, As Easy as ABC? A Review of Thomas Schneider's Study of the TT99 Ostracon
https://bibleinterp.arizona.edu/sites/bibleinterp.arizona.edu/files/2018-10/TT99%20Bible%20and%20Intepretation.pdf
The document that Ben Haring and the other scholars are examining is Ostracon no. 99.95.0297 from Theban Tomb TT99, the burial place of an Egyptian named Senneferi; and it is being hailed as “the earliest known abecedary” (Universiteit Leiden News & Events). The use of the term ‘ostracon’ is far removed from the original meaning (a potsherd with names of people to be ostracized, or voted for). The news report from Leiden University called it a”shard of pottery”, but it is actually a small piece of limestone with an ink inscription on each side; thus it is a tablet with Egyptian writing on it. Note carefully that Haring has a question mark in the title, and he is asking whether the items in this  text are arranged in an alphabetical order, following the sequence that starts with HLH.M, as opposed to the familiar ’Aleph Beth Gimel Daleth scheme (originally ’BGHD).  Thomas Schneider is now suggesting that both systems are in evidence, with the 'ABGAD sequence on the other side.
Anticipating the answer to Haring’s question: what we find is a list of words (nouns rather than names, apparently) with the first four having the initials HRH.M; this looks like a failed hypothesis already, but in Egyptian writing there is no L-sign or l-sound available, so r is used for l (though we will need to keep in mind that  l could also be transcribed by n, nr, and 3 [’aleph]).
The HLH.M sequence-order for the letters is not known before Hellenistic times in Egypt (4th Century BCE onwards; cp. Schneider 106b) but it is attested in Syria-Palestine in the Bronze Age (before 1200 BCE) and in Arabia in the Iron Age.[1]
Is this an onomasticon (a list of names or words) or an abecedary (an inventory of alphabet letters arranged in a standard order)?  If it is an onomasticon, why is it being hailed as the earliest known abecedary? Nevertheless, it could be both, because each word has a symbol after it, and a few of them look like letters (‘pictophonograms’) of the original alphabet. But the total number of such symbols on this fragmentary document is twelve, a long way from the expected double dozen or more; but Haring (195a) surmises that the ostracon was originally twice as long as the surviving fragment;  Wilson-Wright also supposes it was a complete HLH.M alphabet;  but I will argue that these guesses are unlikely or impossible.
It must be said at this point that none of these scholars mention the oldest complete copies of the early alphabet in its pictorial stage (two inventories on three limestone tablets) which also come from Thebes, and should be cited in any study of the infant alphabet; but, astonishingly and deplorably, they are never consulted (though Émile Puech informs me that he has spoken about them in the past), even though they may provide the solution to all the speculation that goes on in the search for the original letters of the alphabet (by Gordon Hamilton, for example)[2].  However, they have been examined by myself, publicly though not ‘publicationally’, in connection with the theories of Colless and Hamilton.[3]

We now begin an examination of this promising artefact. Photographs of each side are reproduced here (after Haring), and for my own use I have produced a paper facsimile of the objecr, by pasting photocopies of the two sides together back to back.
Since Haring (192) gives strong indications that “Group Writing” (Egyptian “syllabic orthography”, a system for transcribing foreign words and names) is present here, we might expect the texts to be Semitic; but he has little success in taking this approach. However, I will presume at the outset (with hindsight) that the words are West Semitic, and that the original pictophonograms that I have proposed for the letters HLH.M (and some others) are there on the tablet.
Haring identifies the sides as obverse (A) and reverse (B), and he notes that the top of A corresponds to the bottom of B; and so the writer must have turned the object over vertically to continue  the inscription, rather than simply turning it around horizontally so that the top lines of each text are at the top of each side.  The text on A is (apparently) broken off at the bottom, and B possibly (though not probably, if Schneider's interpretation is right) has some details missing at the top. The question remains whether the tablet was originally much larger, containing the entire alphabet, and thus with twice the number of letters (22 or more). 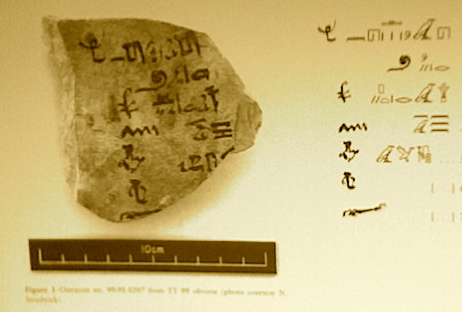