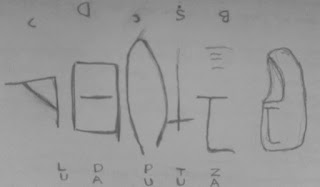 This ancient inscribed object is a "small-scale heddle jack",  a wooden instrument used in weaving; a glance at my rough sketch of the side view will clarify the shape, as cylindrical with a notch and a pointed end. It is 8.2 cm (3.25 inches) long,  equal to the length of the middle finger of my right hand. It was found in Egypt, though its fir-tree wood is not native to the Nile Valley region, so it must have been brought from elsewhere. The short inscription of five characters is surely West Semitic, and is one of the many discoveries of early Semitic writing made by William Matthew Flinders Petrie in Egypt and the Levant. It is now kept in the British museum (note the date 1912, among other accession numbers, though Petrie first published it in 1890).
Gordon Hamilton has gathered the material needed to put this artefact in its historical and geographical setting, and has provided information to help us determine what is written on it (with 5 new photographs from the British Museum).
The Origins of the West Semitic Alphabet in Egyptian Scripts (2006) 330-331.
EA 70881, a small-scale heddle jack from Lahun, Egypt, MAARAV, Vol 14, No 1 (2007) 28-32, and 121-125 (Plates I-V).
This variety of weaving implement ("small-scale") was used on horizontal looms in the Egyptian Middle Kingdom (20th C - 17th C BCE), not the upright vertical looms of the New Kingdom (S. Quirke, British Museum).
The presence of Semites (`Amu, "Asiatics") in Lahun is attested for the period 1850-1700 BCE, approximately (Ulrich Luft). This may have been when the owner of the heddle jack was there, though a Carbon 14 date established for it is 2140-1940 BCE (95% probability!), so it may have passed through many hands through the years, or else it was made from wood that had been serving some other function before it was carved into this form. However, this raises the paradox that this inscription could be older than the invention of the alphabet, and thus be some other script.
The town now known as Al-Lahun (SW of Al-Faiyum) is celebrated for its connection with the mud-brick pyramid of Pharaoh Senusret II (19th C, 12th D), but it goes back to the time of the early dynasties  (30th C). (Wikipedia, and Britannica) 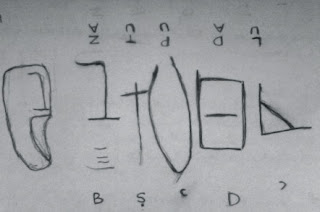 This is my drawing of the heddle jack (8.2 cm) and its inscription (please ignore the letter  on it, obviously too big, not drawn to scale, as all the characters are situated below the notch).  This has generally been the preferred stance for interpreting the text, and Hamilton's suggested reading for each letter is transcribed below it.  The name of the maker or the owner would be expected, or else an identification of the object as a weaver's instrument.
The assumption is that the letters run from right to left, as was customary though not obligatory in early West Semitic inscriptions known to us (examples: Sinai 349,  Wadi el-Hol, and also syllabic texts, Colless, Origin of the Alphabet, 2012: 81-82).
The first character reminds us of the letter A, in its original pictorial form as an ox-head with horns, the original Aleph and Alpha.
The second sign appears to be Het (H or H.), and for a long time the favoured reading was a name  beginning with 'ah.i. However, there is a small projection at the top left corner, indicating a doorpost, and defining the character as a door, Dalt, hence D (so Hamilton).
In third position is a sign representing perhaps a bag (which would be Sadey in my view), or a mouth (P on my table of letters of the proto-alphabet), or an eye without a pupil (`Ayin), and this is Hamilton's choice.
The next letter seems to be a cross, either like a plus sign or a crucifix, hence T (Taw). But Hamilton (playing down the projecting line at the top, and accepting the vertical line as long?) wants to see Sadey (S.), which he traces back to the Egyptian hieroglyph M16, in some Hieratic forms (2006: 203); but he has to find a counterpart on the Izbet  Sartah ostracon, a thousand years later.
The final letter is taken as B, and it is an even more difficult to document; it looks somewhat similar to the way we write Hebrew Beth nowadays, but to match this character with an ancient identical twin is beyond me; Hamilton cites the three-sided Bet of the Arabian alphabets.
The result of this exercise is a name 'D`S.B (presumably a woman, being a weaver), which can be analysed as "(Divine) Father ('d) has created (`s.b)".  The usual word for father is 'ab, but 'ad is also known. The root `s.b  can mean "hurt", but also "fashion an image" (attested in the Bible). Note that Meindert Dijkstra offered a solution along these lines, and I must confess that I had proposed a name 'Ah.i`s.b (unpublished, fortunately!) taking the sequence `s.b as a noun (Hebrew and Aramaic) meaning "toil", and the words would describe the tool as "a brother of toil", working together with its owner in his or her laborious task. And two other intriguing inscriptions from Lahun (or Kahun), published with this one by Petrie (Ancient Egypt, VI, 1921, 1-3; reproduced in Sass, Genesis of the Alphabet, Fig. 282-285) seem to have three-sided houses for the letter Bet.
But the Heddle Jack inscription is regularly exhibited irrregularly, to achieve a proto-alphabetic text: it is upside down. The same mistake is applied to the syllabic inscription on the Megiddo signet ring.

Ah, that's better! Now we can see it in its true state, as a West Semitic proto-syllabic text. Again we will read it from right to left, which was the predominant direction for Egyptian and West Semitic  writing.
First take note of the marks above the first letter, though in our earlier topsy-turvy reading they were below the last letter in the sequence.  Hamilton (2007: 29)  suggests that a probable  interpretation of "this deeply incised horizontal line is as a separation mark signaling the end of the owner's name"; but  he is at a loss to explain the "three shorter, shallower nicks".  Let us suppose that the longer incision at the top serves to indicate the start of the text. The two parallel lines are known to be the letter Dh (D) in the proto-alphabet, and is often found as saying "This (is)" at the beginning of Sinai inscriptions at the turquoise mines. The fourth horizontal stroke might indicate that the syllabic inscription now begins The first letter in the main text, if understood as belonging to the WS proto-syllabary, which preceded the WS proto-consonantary (the proto-alphabet) would say ZA (as noted in transcription below it) and likewise mean "This (is)". The character is a simplified version of Egyptian hieroglyph F27, the tail of an animal: by the principle of acrophony, the WS term for tail, zanab (or danab) produces the syllable-sign ZA; the syllabary does not distinguish Z from D (compare zis for this in foreign English).
So it is possible that the alphabet was already invented when this syllabic inscription was carved into the wood, if the = sign is proto-alphabetic D. It needs to be recognized that a majority of the letters of the proto-alphabet already had a forerunner in the proto-syllabary. This is not the case with Z or D in the proto-alphabet, but the next letter we meet in the sequence is a cross, which is syllabic TU and alphabetic T; whether the cross has a short or a large stem is not significant in the syllabary; here we might have a double T, if the very light incision near the top of the stem is taken into account (not shown on my drawing; slightly marked by Hamilton, but not considered to be significant). Hamilton decided on alphabetic Sadey for this character.
To add to our ZA TU, we now have PU; and this is a mouth (pu), which also functions as alphabetic P; the example on the Wadi el-Hol horizontal inscription has a diving line to separate the lips [(|)]; from the photograph of this cylinder we could imagine that two internal lines portray parted lips, but these are not deliberate incisions made by the scribe. Remember, Hamilton (who has vehemently denied the P as mouth identification in the alphabet) wants this to be `Ayin, an eye, and this possibility still stands, but the syllabary likes to include the pupil of the eye.
Moving on to the door (dalt, used in the syllabary and the consonantary) our collection is now ZA TU PU DA.
Finally,  we can no longer see the ox-head, and I doubt that we can ever find an `Alep or Alpha with a right angle. This is the side view of an eye, showing the white of the eye (lubnu), and hence LU.
ZA TU PU DA LU
Speaking for myself, I would like it to say: "This is a heddle jack".
But where can we find an ancient Semitic word for that? In the Bible, at the opposite extreme,  the spear of Goliath is compared to a "heddle rod" (manor) or "weaver's beam" (1 Samuel 17:7).
A heddle is one of small threads between which warp is passed in loom. Looking at the sequence DALU, we are reminded of the the Hebrew root dll "hang down", and the word dallah "thrum", referring to warp, threads stretched lengthwise on loom, to be crossed by weft. Where the little jack fitted into all this is beyond my ken; and it is supposed to belong in the period of horizontal looms, not vertical (which seems to fit "hang down" better).
TUPU is reminiscent of Hebrew top "timbrel", a small drum held in the hand. Can we stretch this word to cover the jack, as a small instrument held in the hand?
"This is a weaving instrument"
The mystery still stands, but the fact remains that this is a West Semitic syllabic inscription, and not early alphabetic.
(17/6/2021) I have decided to consult the Akkadian lexicon (at that time West Semitic and East Semitic shared many words, as I have noticed in studying the Gubla proto-syllabic texts and the Sinai proto-consonantal inscriptions), and I have found tappu(m) "companion" or "partner' (in business), and dallu(m) "small, stunted"; this combination could thus say,
"This tiny partner (of mine)".

Posted by Brian Colless at 1:20 AM