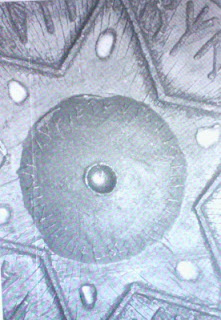 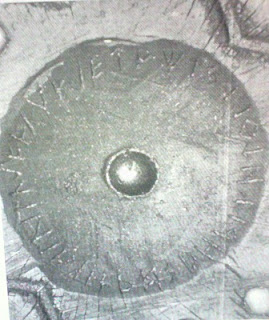 Here are three views of an object that was brought to my attention in November 2000, by the Volcano Art Gallery in Auckland. I have never seen or handled the artefact, but details were supplied by Neil de Croz, the director of the gallery. Its age and origin are not known
Dimensions are: 26" x 20" x 9". Weight: 78 lbs.
The end bowl: 6.5" diameter, 3" deep (charred)
The central bowl: 7" diameter. 2" deep, inscribed, black stone embedded in the centre .
The bowl is in a six-pointed star (14" from point to point across) with 6 embedded stones.
The star is within a circle: 16" diameter.
An inscription runs round inside the circle, but does not intrude into the star.
The letters are RUNES, from the Germanic Runic alphabet (futhark, th as in thing), having 24 characters..
Runes are based on the Greco-Roman alphabet.
Their use is attested from the 2nd century of the current era till early modern times.

What purpose did this object serve? Divination? Burning incense?
What are the messages in each inscription?
You tell me!

11/May/2016
The Germanic futhark had 24 letters; Scandinavia had 16; the Anglo-Saxon system had up to 31.  The runes in the upper circle are arranged in six sections (formed by the six points of the star) with four runes in each of the six fields. That makes 24 (6x4). So it is the Germanic futhark.

Expert opinion has come to our aid: the letters do not form words, apparently, but merely represent each of the signs.

James E. Knirk
Professor, Runic Archives, Museum of Cultural History, University of Oslo
The runes around the outside of the six-pointed star I was able to read, but it was not easy. I start on your blogspot picture with the runes to the right of due north, i.e. from 12 o'clock and on around. They read:
ozhk (or: oRhk, one uses both transliterations)
ïsjr   ebfu   wtpi   ŋmgd (the first an ng-sound)   aþnl

This is then all 24 runes in the older rune-row, but in apparently random, at any rate not linguistically understandable or linguistically motivated order. It is very difficult for me to see this as anything other than a relative recent attempt to write runes. For me, this is confirmed by the form of the r-rune. In much of the New Age runic literature about runes as means for fortelling the future and other very popular presentations and the like, the r-rune has a special form that is basically unknown in genuine runic inscriptions, be it from the oldest times or even up to "modern" times (here meaning the Reformation, early 1500s). It is like our R, but the leg going obliquely down from the pouch is truncated, usually very short -- exactly like in this inscription. There is absolutely nothing that seems genuine (i.e. "old") about this piece.

I hope you are not disappointed by the fact that this apparently is something maybe 20-40 years old, and of little or no interest to runology, and probably not to cryptology either.
It seems to me that the inscription in the bowl is meant to be the same as the one around the star.
One thing I was surprised and delighted to find about the runic system is that the characters can be used not only as simple single-sound letters, but also as syllabograms and logograms.
Thus the M-sign can represent mon 'human' (logogram), and the syllable mon ('rebogram') in Solomon.
I have discovered that the pictograms of the proto-alphabet were used in those same three ways, as I point out in all my articles on the early alphabet in the Bronze Age and the Early Iron Age. This was how the Egyptian hieroglyphs functioned, too. But how did this practice carry over into the Runes, when the Greek and Roman alphabets (derived from the Semitic alphabet) apparently did not have this idea?