THE GRAVE OF ASA 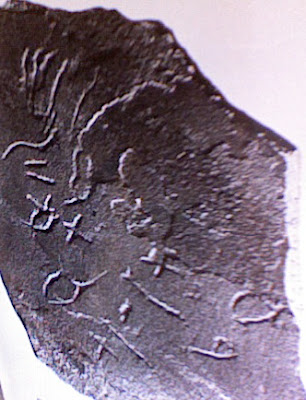 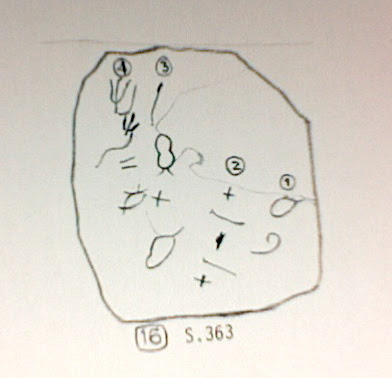 
As we have been attempting to decipher the Sinai protoalphabetic inscriptions, we have stumbled on a story of one of the workers on the turquoise-mining site of the Pharaohs. His name is 'Asa, and we have seen his offering to the goddess Hat-Hor (Semitic Ba`alat) in the form of a sphinx statuette. There is a record of his sickness, in writing on a rock on the way to the spring that supplied water for the expeditions (perhaps he was seeking healing there, as it is labeled "the spring of the Mother (goddess)"). An apparent obituary for him is engraved on the interior wall of Mine M: "'Asa has done his work".

And here before us is an inscribed stone slab (Sinai 363) which was found in a mound, 50 metres south of Mine L (which adjoins Mine M). Its inscription includes the sequence ' S, which could be referring to this literate labourer whose trail we have been following. My interpretation of the evidence views this tumulus as 'Asa's burial place (situated at a respectful distance from the work area), and the plaque as his gravestone. The ' S combination is found on the left side, with the ox-head below the fish, so we would here have to read upwards, whereas all the other lines are read downwards. However, we have seen the kind of twists and turns these inscriptions can take, in the text in Mine M (the obituary), and there are numerous other examples in the collection. I have numbered the columns from the right (as is customary) but I understand the inscription as starting in the top-left corner. 'Asa will be at the end of column 3, running upwards to meet the end of line 1 (in which I find 5 letters).

This is my reading of the letters:

The first letter is a large K, and the third letter is a small K, the second and fourth signs are snakes, both saying N. The big K has a stem, but it is not H (person jubilating with arms raised); it matches the K on the Theban protoalphabet (which is in the bottom left corner, with its stem in the eye) and is obviously the forerunner of Greek Kappa and Roman K. The right-hand stroke of the smaller K has merged with the head of the snake next to it.

Why would the engraver write such a small K after producing a large one? Perhaps for the same reason as he cut a tiny Q in line 2 (when Q is the tallest sign on the Theban protoalphabet), and used cobras for N in lines 3 and 4 but horned vipers in line 2. No special reason.

The word KNKN is known in Ugaritic literature in the word KNKNY (5.5.13). In the myth of Ba`al and `Anat (who is likely to be the Ba`alat we meet in the Sinai inscriptions), Ba`al is instructed by the sun-goddess Shapsh to go down into the underworld for a time; to enter it he must lift the rock or mountain of KNKNY. This has been taken as the name of a mountain, but the Y could be the suffix meaning "my". A KNKN could thus be a hole in the ground (or a tunnel) giving access to the netherworld, and this would be the place where the sun set every night, and passed through the realm of the dead. The same word could also be present in a damaged text (19.147), referring to a human burial place, for Aqhat. In the situation before us the KNKN is associated with a tumulus, a 'burial mound', equivalent to the sun-goddess's mountain over her KNKN. I propose that KNKN be translated here as "grave", that is, a place where a person's body is buried, usually with an inscribed tombstone marking it and identifying the person by name, and also bearing a pious statement, such as "Rest in peace", an elegy, and an invocation to God . Well, that is certainly what we will find on 'Asa's gravestone.

The two horizontal strokes beneath KNKN signify Dh, probably representing dhu, "this". Moving to the next line, we see another N, a snake (though there is a faint line to its right which has led many observers to imagine it is an ox-head). Below it is a thread twisted into a hank or a wick, Kh. This combination, NKh, is a verbal root signifying "rest (be in repose)", which invites a connection with the funereal "Rest in peace". The T below it makes a noun, NKhT, presumably meaning "rest" or "resting-place".

Accordingly, I offer this translation:

The previous column runs T N Q N T. The Q is tiny, but it is clearly a stick with a cord (a "line") wound around it (qaw), though my drawing may be going too far by showing the end of the string as well as the top of the stick, as on the sphinx statuette, but both forms are attested. Our expectation of a religious utterance are met, and yet not quite fulfilled: TN means "give" (imperative mood); QNT means a funeral lament, as delivered by David for King Saul (2 Samuel 1:17-27, "Tell it not in Gath", "How are the mighty fallen").

So then, this gravestone on a burial mound can be interpreted thus:

"This grave is the resting-place of 'Asa. Give a lament, O God".

Missing letters are: Hh, Z, Sh, Th, Gh, Tt (emphatic T), and Zz. Other Sinai inscriptions will need to be examined to try and identify these.