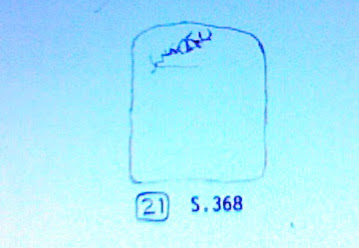 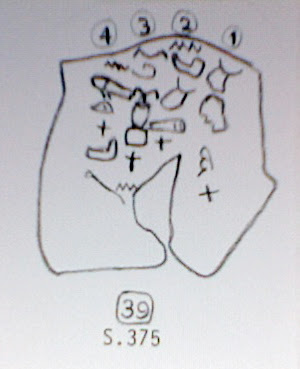 
Here are two more proto-alphabetic inscriptions from the ancient turquoise mines of Sinai. Each has the sequence 'S (ox-head, fish), which we recognized as the personal name 'Asa in inscriptions 345 (sphinx), 376 (rock face), 358 (mine interior wall), 363 (gravestone). However, in Sinai 368 (also numbered 21, above) we find one complete word 'SM (ox, fish, water), which would be West Semitic 'asam, meaning 'store' or 'granary'. This small stela was discovered in a stone enclosure near Mine L, and this would have been the place where grain was stored.

The remaining occurrence of 'S is in column 2 of Sinai 375 (above, also numbered 39), and it forms a word 'ST, which seems to be related to East Semitic (Babylonian) ishittu, 'store'. Actually, I am pondering whether that is S, a fish (it differs from the one in line 4) or the two serpents protecting the sun (shimsh), Sh; but it could well be that the writer could not remember which was right, and he put both letters, first one, and then the other, when he had made up his mind; for our purpose the Sh would be preferred, since it allows us to distinguish Th (roughly /\/\) and Sh (approximately \/\/). Note that Romain Butin first led us to believe it was a fish, in his drawing of the inscription, and he attributed the value S to it; but others have transcribed it as D (for dag, 'fish'); they also want the throwstick (boomerang) to be P, instead of G (gaml); so they completely miss seeing the granary and the garden (gn).

By the way, this broken document (S 375) was found in Mine M, which adjoins Mine L.

Starting from the clue that the text contains a reference to a grain store, my interpretation is that it defines the daily rations for the workers.

In line 1 the word 'RKhT appears (ox-head, human head, hank of thread, cross). It could mean 'cows' (we know that there were goats in that dry place, from the presence of caprine bones, but not bovine), but more probably 'rations', or 'provisions'. The corresponding Hebrew word is used in 2 Kings 25:30 for the daily allowance of food that a captive king of Judah received at the court of the king of Babylonia.

In column 3 I discern this sequence of signs:
Th L Th T Ss B T M
The th-l-th-t consists of two breast-signs, separated by an L and followed by a T (only the vertical stroke of the cross is clear). As far as I can see, these are the only cases of Th (from thad, 'breast') in the whole collection of Sinai proto-alphabetic inscriptions. The word that the four characters make is the numeral 'three', and the following word is SsBTM, meaning 'handfuls'. This term is used in the Bible story of Ruth (2:16) with reference to gleaning ears of grain in fields. We can see a tied bag for Ss, though my drawing may be misrepresenting what is there: on the photograph the bag is apparently an oval with its cord hanging down on the left side. 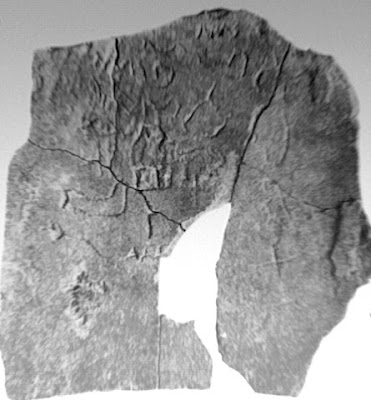 On the copy of the proto-alphabet from Thebes the Ss (below the 'aleph and above the L) has the tie protruding upwards on the right.

The results we are achieving look plausible:
(1) Rations: (2) out of the granary (3) three handfuls

It is my contention that GN is simply the Semitic word gan, meaning 'garden' (as used in Genesis for the garden of Eden); it occurs in four of the Sinai inscriptions, and although a garden seems somewhat improbable in this rather barren setting, I can invoke my own observation of what is feasible in this region. Standing on the traditional Mount Sinai I looked down into the grounds of the adjacent monastery and saw a rich garden.

The workers had a vegetable garden on the site, and I find a reference to the vegetables in the sequence MS`T; it could be from the root NS`, 'to pluck' or pull out'. The -t would be the feminine ending (singular or plural) on the noun, and I suggest the meaning is 'garden pickings'. The initial M could be a part of the word; or the same m(in), 'from', as in mg, 'out of', in line 2; or ma, 'and'.

For the fourth column, I have felt a need to add 'and';  this is another instance of a seeming lack of a conjunction in an ancient alphabetic text; in the Wadi el-Hol inscription from Egypt, the horizontal line begins with RB WN MN, which I would interpret as 'plenty of wine and provisions'; my suggested explanation for the missing 'and' is that the word for 'and' is 'u', which can not be represented in the vowelless consonantal script that was the proto-alphabet.

In this instalment we encountered the letter Th (breast) in the word for 'three',  a possible Sh (snakes protecting sun); and we had further confirmation of the tied bag as Ss, the hank as Kh, the fish as S, and the boomerang as G (twice), together with the well-established eye as `ayin, the ox-head as 'aleph, the human head as R, the cross as T, the house as B, the water-waves as M.


More details on these documents (Sinai 368 and 375) can be found in my published article: Brian E. Colless, The proto-alphabetic inscriptions of Sinai, Abr-Nahrain 28 (1990) 1-52, particularly 28 and 42-43.
The reference for the first publication of Sinai 375 is:
Romain F. Butin, The New Protosinaitic Inscriptions, in  Richard F. S. Starr and Romain F. Butin, Excavations and Protosinaitic Inscriptions at Serabit el Khadem, Studies and Documents 6 (London 1936) 31-42. The photograph (inverted!) is Figure 21 on Plate 10.

Posted by Brian Colless at 4:31 PM