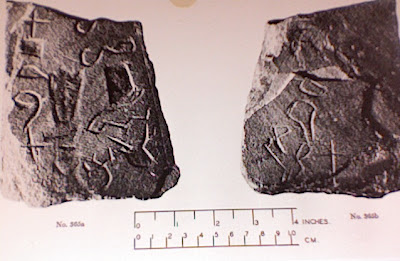 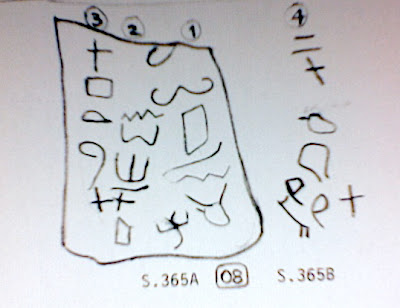 Here is another inscription on a stone from the region of the ancient Egyptian turquoise mines on the Sinai Peninsula, more particularly from the camp site of the mining expeditions.

We can see that the writing is protoalphabetic, and we assume that the language will be (as in the four 'Asa inscriptions we have studied) Bronze-Age Canaanite, the West Semitic tongue that became Phoenician and Hebrew in the Iron Age. It is not possible to date the inscription precisely, but we can say that is from the 16th century BCE (Late Bronze Age) or earlier (Middle Bronze Age).

There is writing on each side. Starting from 365a, which has the most letters on it, we recognize a familiar name in the column that I have numbered as 3: "Ba`alat". Below a cross (T) is a square representing a house and thus B (bayt, Beth, Beta); then an eye (`ayin), an L, and a T. This is the goddess Ba`alat, the female counterpart of the god Ba`al.

On the inscribed sphinx we found her preceded by the word M'HB, "beloved", and this word can be found at the bottom of the stone. The wavy water sign for M and the ox-head for 'Aleph are at the end of column 1; the H is to the right of this, a person with arms upraised; the expected B is not easy to find on the photograph, but my drawing suggests a rectangle with its top side running obliquely.

With regard to the remaining letters, in line 1 there is an inverted version of another distorted B. Below it is a long curvy line, which is presumably a snake and therefore N; on the photograph it seems to have horns or a head.

Above the B is another curvy sign, which I understand as Sh (from shimsh, "sun"), representing the uraeus serpent that embraces the sun in Egyptian iconography (it is also hieroglyph N6). I suggest that the sun-disc has here dropped out of the character; there are cases in West Semitic inscriptions where the disc is still there, but not in the Sinai examples. This sign occurs frequently, but apparently not in the four 'Asa texts. The opinion of W.F. Albright, which is widely accepted, is that it represents a bow without its string, and it certainly resembles hieroglyph J32; he assigned the hypothetical value Th to it, on the basis of a hypothetical word *thann, supposedly meaning "composite bow". In my view, taking all the available evidence into account, the sign for Th is a human female breast, going with the word thad (which became shad in Hebrew), meaning "breast". The Th-sign became the letter Sh in the Hebrew and Phoenician alphabet; its meaning was forgotten, and it became known as Shin ("tooth").

We should call on our proto-alphabetic ostrakon from Thebes for assistance in distinguishing Th and Sh. 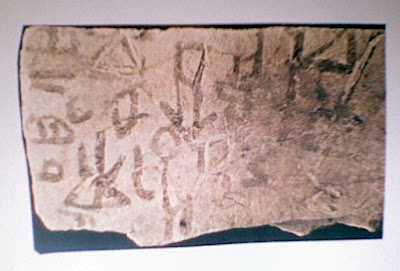 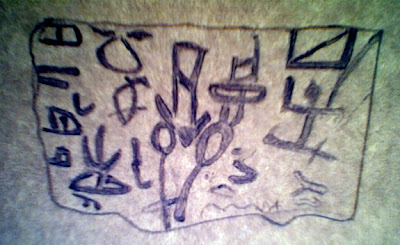 Concentrating on the bottom right area, the candidates for Sh and Th are above the M (wavy line) and to the right of the M, under the Kh (Y-shaped, hank of thread). Clarity is not freely available in this puzzle, but I will choose the one on the left as Th (breast), and the one on the right as Sh (very faint and small).

Returning to the inscription (365a), we see in line 1 a sequence of letters Sh B N. One possibility for this is "captives", and if this is correct it tells us something about the status of the workers: they are probably prisoners of war engaged in forced labour.

Above the Sh is what looks like a remnant of another Sh, assuming that part of the stone has worn away or been broken off at the top. This could function as sh, "of", thus giving us "of the prisoners".

We might expect to find the thing belonging to the prisoners in the middle line of the text (2), which is rather murky. In my view, the central character (shaped like a heart or a foot) is composed of three signs: M-Sh-K, followed by N-T. The M, Sh, and N are narrower versions of their counterparts in line 1. The K is a stylized hand with three fingers; compare the example on the ostrakon (bottom left, above the eye, and beside the L).

This combination of sounds produces the recognizable word m-sh-k-n-t, from the root sh-k-n, meaning "settle, dwell", and so the noun means "dwelling-place". Here it has the feminine form ending -t, as in Ugaritic; in the Bible it is mishkan, and it refers to the "tabernacle", the sacred tent of the God of Israel in the wilderness of Sinai. Now, I am not suggesting that this was the place where the Israelites camped on their way to the promised land of Cana`an; but this was definitely an ancient camp site, and this stone marks out a section of it as being the place where prisoners had their tents. The word m-sh-k-n-t could be singular or plural ("abode" or "tents"), and in either case we have the adjective (or passive participle) m-'-h-b-t agreeing with it.

In the four 'Asa inscriptions we have seen how the text can meander over the surface of the stone. Here the statement starts in the middle column (2), and moves to the column on the right (3), continues round under column 2, then leaps to the top of column 3, and runs down.

Accordingly, we have this plausible reading:

Turning the stone over, we can see another inscription (365a) that has not stayed in line.

In the top half we can faintly detect Dh ( = ) and T (+), as shown on my drawing. Then we see the head of an ox, with its ear intact (compare the 'aleph on 365a), but its horns have been lost in the damage the stone has suffered at this point. Below it is a human head with a narrow neck, hence R.

Underneath the head is a Waw, a hook. The corresponding signs, RW, appear on the lower left side of the Thebes ostrakon (see above), but neither has exactly the same shape as the ones we see here; this tells us that in the proto-alphabetic stage the letters did not necessarily have fixed forms. A head represents R, and a hook W, and a door D. There is a door to the left of the head; compare the inverted version on the ostrakon, at the top, between the fish (S) and the Bayt.

To the left of the D is a Y, a forearm with a hand, and its thumb and finger are pointing downwards; compare the Y on the ostrakon at the bottom in the left corner. Obviously the common attempt to combine the DY into Kh is misguided.

The order in which I have presented the characters produces an intelligible reading:

The dh-t is "this" or "which", and "Arwadite" is the adjective from Arwad, the ancient Phoenician city situated on an island north of Gubla (Byblos, now Jibeil). The gentilic adjective refers to the "abode" on 365a, but it also indicates the origin of the prisoners who slept in the tent(s) at this spot in the camp.

For the purpose of sign-identification, this inscription has highlighted the sun-character, Shimsh. We now need to examine a text exhibiting the breast-sign, Thad, and Sinai 375 will serve admirably, and also show us the rations allotted to the workers at the turquoise mines.

See also the discussion on Sh and Th in the article on Sinai 376.

Letters still not encountered in the Sinai inscriptions are: G, Tt, Hh, and Z.

On the Thebes ostrakon (see above) the boomerang G is on the left side, between Dh and R.

Tt (Tet) is the long letter below the fish and between L and Q, having this shape: O--+.

Hh is a house with a courtyard, in the top left corner.

Z should be two triangles, but it is not on this ostrakon (though it can be seen on two other tablets from Thebes).

Posted by Brian Colless at 5:03 PM

I went to the Egyptian Museum today for the first time and saw SINAI INSCRIPTION 365, which is the only one (PS Inscription) on display presently in the entire museum (I'm not sure if they possess others).

I do not know how that drawing came about but most of those marks are highly inaccurate. I saw (physically... in person) perhaps half of them and came to the conclusion that it says: [cut off probably S^] S^BY(or W)+N' [some perhaps logographic character]-?-Z-H D_-B`LT

I am unsure of the middle of the three lines portrayed - believe me there are only three visible lines of characters.

My conclusion was that on the basis of visible paleography it says something like:

The Wassim logogram and the D_ starting the third line similar to one North Arabian variant suggest to me that this angle should be strongly considered.

If I had a scanner I'd scan my (also less than accurate) drawing [cameras not allowed in... I had to exit and reenter].

Ok no my D_ was absolutely incorrect, sorry. I must have gotten the parallax from standing 2 or 3 feet below it.

I stand by the rest though.

Brian I also think I may have - I will have to do some checking on this - inadvertently discovered a West Semitic seal not previously identified among very similar seals all in Egyptian from the Old Kingdom (I believe).

This particular seal has clear Egyptian influences, but some of the characters present do not have Egyptian analogues. Additionally (though this is not conclusive because my ability to read hieroglyphs is very limited and the museum does not have wifi as far as I know) the setup of the seal is Pr+N, which given the lack of similarity between the other characters in the inscription I thought could easily be BN rather than PRN or HN in Egyptian.

I'll send a drawing at some point, and cross-reference the drawing I made today with lists of Egyptian characters to make sure I am able to rule out any relationship.