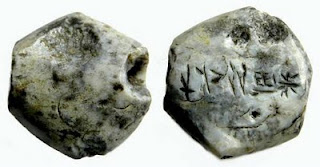 This interesting seal was found in 2008/9, and Olaf Sprenger, has kindly provided photographs; the signs have been inked to allow recognition, and an impression has also been provided.

According to the dealer the artefact was found in southern Israel  among a lot of scarabs, mainly dated to the Hyksos period.
The inscription is strangely ambiguous: at first glance I took it to be the Cretan script known as Linear A. The first character on the left is an open `ankh (the Egyptian symbol for 'life'), which is ZA in Linear B, and presumably also in Linear A (from which Linear B was created). At the other end we appear to have KE; then YA (a door, though it could be MO); next, two examples of SA (cuttlefish); I pass on the subsequent sign or signs: KE YA SA SA ... ZA (or vice versa).

On the other hand, it could be West Semitic: not the proto-alphabet (the `ankh is not in its inventory) but the syllabary (in which the open `ankh stands for H.I/HhI/KhI). 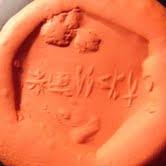 Looking at my drawing of an imprint of the seal, all the characters can be identified as Canaanite syllabic (or logo-syllabic, as the pictophonograms could also represent whole words).
NU: the character (and it looks Chinese!) depicts a bee (nubtu).
DA: a door (daltu).
BU BU: two reeds (bunduru).
'A: this might be two separate syllabograms (RI, and DI?) but it seems to be the ox-head ('alpu) with horns, though lying on its side, as it often did in the early Canaanite alphabet (or consonantary) in the Iron Age, until the Greeks turned it upside down as Alpha.
HhI: the `ankh (representing the top vertebra of the backbone), going with h.iwwatu, 'life'.

NU DA BU BU 'A HhI or
HhI 'A BU BU DA NU
What sense can be made of this?  Several possibilities can be thrown at it. DANU as the tribe of the Danites, or the place Dan, or the verb 'judged', or daltunu 'our door'; 'ABU 'father', or 'ghost';  'AHhI 'my brother'; root NDB 'volunteer'; personal name BUDANU, and this offers:
"Life! Father Budan."

But in the opposite direction, DABUBU might be dabb 'a bear'. Could that be a bear's head below the line of writing? How would the bee (NU) fit into the picture (bears and honey bees are thought to have connections).
It may be a personal name.
Nudabbu'ah.i
Nadab is a Biblical name; Nadubum is an Amorite name.
Taking 'ah.i as 'alpu (rebogram for 1000) and H.iwatu (logogram 'life' ), then it might correspond to Hebrew lekhayyim:
"Nudabbu, a thousand lives"( reincarnation?!)
Better taking 'a as 1st p. sg. prefix and Hhi as logogram for verb 'live'
"Nudabbu, I shall live"

Turning to Babylonian for enlightenment, there is abubu 'a flood'; a root dbb meaning 'speak', 'litigate', 'call to account', hence (with NU for passive voice):
"My brother is called to account."
If the line with a possible hook on the end is not the doorpost but an arm, then we have dayinu, 'judgement' or 'judge'?

Or we take DANU as dannu, 'strong, mighty', then:
"Life! The mighty flood."

The bear idea is attractive, and it is could be a personal name with a blessing ( "Nudabbu, I shall live"), but I will just have to keep trying till I discover an interpretation that rings true.

Posted by Brian Colless at 3:35 AM