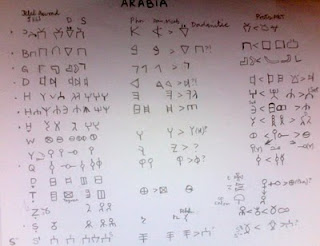 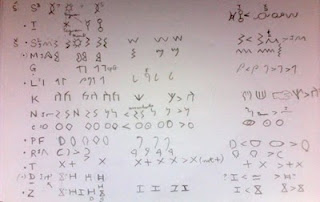 This  table of signs attempts to show how the northern and southern Arabian scripts (consonantal alphabet) developed from the West Semitic (Canaanian) proto-alphabet (consonantary).
To see an enlarged version, click on the photograph of each section (and a printout can then be made, if desired).

On the right-hand side, the original characters are shown, with arrowheads pointing to Arabian letters which may be derived from them.
On the left-hand side, the columns exhibit a selection of North Arabian letters (D indicates early Dadanitic, Dedanite) and South Arabian signs (S is for Sabaean).
The middle section shows forms of the Phoenician (Phn), Aramaic (Dan stela), and Moabite, of the Iron Age, alongside Dadanitic letters; this demonstrates the improbability of the Arabian alphabet having been based on the Phoenician consonantal alphabet in the Iron Age.

The general table below shows the whole range of the development of alphabetic scripts in the Bronze and Iron Ages, from borrowed Egyptian hieroglyphs to Greek letters.
Click on the image to see a larger version of the table. 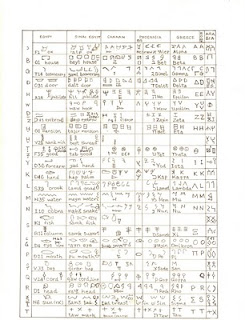 Source for the forms of the Arabian letters:
Michael C. A. Macdonald, Reflections on the linguistic map of pre-Islamic Arabia, Arabian Archaeology and Epigraphy 11 (2000) 28-79
On Wed, Nov 17, 2021, Andrew Harris asked me questions about the evolution of the West Semitic proto-alphabet and its transmission to Arabia, with particular reference to any letters representing the sound Daad [d.], and here is my response:
The Arabian consonantaries began in the Bronze Age (before 12000 BCE).
The HLH.M order of the letters is one indicator of this dating, as it is not attested in NW Semitic in the Iron Age.
https://cryptcracker.blogspot.com/2015/11/h-l-h-m-order-of-alphabet-letters.html
The long alphabet (Proto-consonantary) is clearly in evidence in Arabia:
Kh/H as hank  Gh/G as grapevine stand
sun with serpent O_o (but = Th not Sh)  breast \/\/ (but = Sh not Th), so a reversal has occurred
Stephanie Dalley April 19, 2021
The tablets of the First Sealand Dynasty (Dalley, CUSAS 9) seem to have a reference to the use of sticks, perhaps such as have come to light in the Yemen: midribs from date palm fronds which can be dated by C14. As they are organic, and so would not survive in Southern Iraq, they may help to explain why so few clay tablets have been found dating to that period. A collection in Leiden University library has been thoroughly published. I wonder if the ‘cigar-shaped’ clay tablets found at Ugarit, as well as similar ones shown in CUSAS 9, imitate the very unusual format for cuneiform texts and might be connected with the ‘Arabian’ order of alphabet letters known from Ugarit. The discovery of MBA remains of a walled city at Tayma may allow the possibility that early alphabetic writing comes from Arabia and reached the Levant from there. Is this too speculative?
(BEC: It might have been a transmission station for the alphabet, but into Arabia, from the Levant and Egypt.)
Aaron Koller "The Alphabet", ANE Today, VIII, 1 (2020)
Ancient Yemen (South Arabia) writing system had two types: monumental on stone, quotidian on wooden sticks. Advances made through the work of Peter Stein (https://uni-jena.academia.edu/PeterStein) and Christian Robin (https://cnrs.academia.edu/ChristianRobin) Radiocarbon dating puts some of the sticks in the 11th Century BCE
Andrew Harris: Taymanitic comes across as a west semitic dialect, which makes me wonder how many pockets of west semitic actually preserved the daad even if there is no evidence of it in West semitic writing (presumably an emphatic lateral sibilant?)
North Arabian is West Semitic, South Arabian is South Semitic; to separate the Arabian from the Levantian we say Northwest Semitic. I say West Semitic alphabetic scripts (including all the Arabian versions) because they are a family (and, of course, all alphabets are descended from the West Semitic proto-consonantary).

BEC: I can not find a [d.] in NW Semitic, and I have given reasons for its absence:
D.aad.
We know that this consonant is missing from the cuneiform alphabet of Ugarit (and elsewhere).
I have not found it anywhere in proto-alphabetic texts.
It certainly had no place in the restricted inventory of consonants of the proto-syllabary of Byblos and elsewhere.
I offered proof of its non-existence in West Semitic in 1990, in my reading of Sinai 356:
' n k s. r h. mhb`lt  "I am the excavation chamber beloved of Baalat".
The Arabic cognate word is d.arih.
(10.12.21) I have just spotted another one, in Sinai 375
https://cryptcracker.blogspot.com/2007/08/sinai-food-rations-sinai-inscriptions.html
tltt s.btm "three handfuls (grasps)"  (Hebrew likewise does not have T.et in this word)
Ugaritic s.bt. "grasp"; Arabic has d.bt., and these two examples remove D. from the picture in NW Semitic.
Another possible indication is that the Arabian scripts apparently had to invent a new sign for D. (a variation on D for dalt, door, a divided rectangle but no post) and H.et had one side wall removed to look like E (and even a trident!).
However, the fact that Shin and Sin are represented by the same letter (\/\/ from shad "breast") suggests that other consonants could be spoken, and necessarily recorded by a related letter (D. by S.).
Can we do better than that to explain the missing D. sound?
(Tyre and Sidon are supposed to show that some sounds were active but not recordable in the Phoenician consonantary; I have forgotten the details.)

Incidentally, I have just discovered another inscription in WS proto-syllabic letters, in Michigan:
https://sites.google.com/site/collesseum/huron-stone
The characters are not pictorial.

Now, your thesis (Andrew Harris):
[1] [WS Proto-sylabary]
Sometime before 2300 BCE the [REbus] syllabary developed, originally in pictorial form but very soon after a linear form developed.
Thus, we are to suppose that there was an earlier form of the WS proto-syllabary, where the borrowed hieroglyphs were much clearer?
Our oldest witness is thought to be the Tuba tubes (3M BCE):
https://cryptcracker.blogspot.com/2007/03/oldest-west-semitic-inscriptions-these.html
https://cryptcracker.blogspot.com/2021/04/another-lakish-inscription.html
Looking at the oldest forms of the syllabograms, we first ask whether they are Egyptian hieroglyphs borrowed for a a West Semitic writing system:
A good example is the circle with a dot at its centre; this was the Egyptian symbol for the sun (ˆra`)
The `ankh for H.I(watu) "life, and the nfr for T.A(bu) "good", are simplified at Gubla.
NB There is another possible explanation. James Hoch noted that Old Kingdom hieratic cursive forms were being used in the Gubla texts.
[2] [WS Proto-consonantary]
Before 1800 BCE the consonantal alphabet developed out of the syllabary, adopting both forms, pictorial and linear.
Thus far, only pictorial forms of the proto-alphabet have been discovered in the archaeological record, but the more linear alphabet existed from the beginning.>
Evidence for an original stylized version of the characters is lacking.
What seems to have happened is that the new WS consonantograms were WS syllabograms that were given a new function (while retaining their roles as logograms and rebograms);
but instead of using the old forms from the proto-syllabary, the makers of the proto-consonantary introduced current versions of the hieroglyphs into the new system.
Thus SHI (from shimshu sun) became Sh, but it was not simply a circle representing the sun-disc, but the uraeus serpent was added to it (Wadi el-Hol), or the disc was omitted, leaving only the serpents (Sinai); this looks like a case of early linearisation, perhaps; at the same time the serpentine forms slid into the updated proto-syllabary.
In the case of the syllabogram SHA (from thad/shad "breast") becoming the consonantogram Th (note that there was no Egyptian double-breast glyph),  the \/\/ sign continued through both systems, though it became Sh in the neo-consonantary (short alphabet, with \/\/ covering Th, Sh, and Sin). This is an exceptional case, since new consonantograms had to be invented for consonants that did not appear in the proto-syllabary. Incidentally, Hieroglyph D27, a single breast, can be invoked as the counterpart for the syllabogram 'I ('irat "breast").
The Phonecian or 'international' linear variant took over, leaving the pictorial forms of the proto-alphabet to become obsolete.
In Arabia various regional versions of the long alphabet developed.

Posted by Brian Colless at 2:33 AM