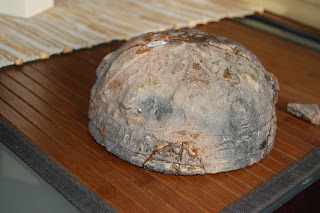 This antique bowl was (reportedly) discovered at Byblos (Gubla, Gebal), an important maritime city of ancient Phoenicia, on the coast of Lebanon, 32 km north of Beirut. It was in a private collection (1950s) of Jack Colheart (USA), and is now in the possession of Wayne French (Cooranbong, New South Wales).
Information and photographs are deposited here:
https://www.dropbox.com/sh/j5pdoq3qfmqbn6y/AAAuJc_Xb4R0hLqhpb9u5Y6Ia?dl=0
and more photographs here:
https://www.dropbox.com/sh/nesl0xhxicz6tqg/AACzMWmpbiDkt0xNBSjADZ1Ra?dl=0
It has an inscription, in a recognizable form of the Phoenician alphabet. I would date it in the Bronze Age (before 1200 BCE) rather than the Iron Age (after 1200 BCE, the Biblical Period),
This imprecisely provenanced object is unlikely to be a forgery, in my opinion, though a replica has been made, as shown here: 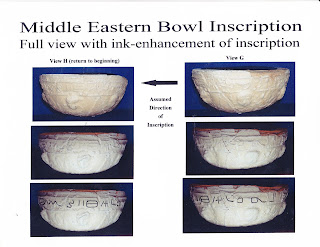 In studying the inscription we can start with Paul Maloney's useful transcription of the text (click once on the image to see an enlargement): 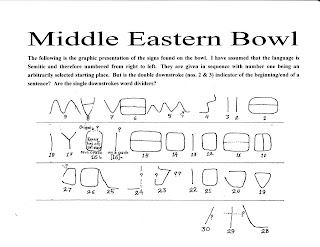 For identifications of the letters of the protoalphabet, refer to this essay: Alphabet and Hieroglyphs.

In our search for the various letters (assuming a maximum of twenty-two consonant-signs, which is typical for Byblos) we start with the rectangles (including the squares). These are both unusual forms for the letters they represent, especially as compared with the Phoenician alphabet as used at Byblos in the Iron Age.
[H.] The double or divided rectangle (1, 6, 11, 15) is wide for the letter Het (H. or Kh), but we can safely accept this identification; its original form was a house with a courtyard.
[B] The square (12, 14, 21, 26) must be Bet (B, Beta), showing the ground plan of a simple house, and this is very archaic.
['] There is at least one ox-head (8, and also possibly 22) for Alep (Alpha, ', glottal stop); this stance is surprisingly archaic; in the standard Phoenician alphabet it is on its side, and in its evolution it can appear in an inverted form, as in Alpha..
[T] The cross (29) is Taw (the signature mark of an illiterate person).
[M] The water-wave sign is present, with two waves (9) or three (5).
[Sh] One example (4) of Shin (originally depicting a human breast, shad) in an oblique stance.
[G] Gimel (originally a boomerang) is there (7).
[N] We look for a snake, and 25 and 28 are tempting in this regard, but the simple vertical stroke (2, 3, 13, 18) is also a possibility; there may be some faint heads and tails lurking on them..
[L] 25 and 28 could be Lamed, and they make a nice hypothetical sequence at the end: LB`LT, "to Ba`alat" ("the Lady", the title given to the chief goddess of Byblos).
[`] `Ayin is an eye, and 27 seems round enough for that letter.
[W] The Y-shaped character (17) would be Waw rather than Yod (which is not found in this text).
[S.] 23 is a good candidate for Sadey, which was originally a tied bag.
[T.] Tet is usually a circle containing a cross, and 20 is the nearest sign to that formula; it actually matches the South Arabian letter for Z. (which is not in the Phoenician alphabet, but was in the longer form of the early alphabet). In the inscription of King ShPT.B`L of Byblos, the T. in his name has (anomalously) only one stroke in the circle, but in its second appearance it has two, though the circle is not clear!
[S] Samek is normally a spinal column (--|-|-|, samk "support") but also a fish (samk); I suspect that 19 is the tail and 20 is the body of a fish (they are joined on the bowl, not separated as on the drawing).
The missing letters are P (possibly there, in position 24), K (a strange absence, given its relative frequency, and the expectation of the word ks, 'cup, bowl'), R (also abnormal), H, W, Z, D, Q (but these five are in the less frequent half of the table). We might wish that the inscription had been longer to see what forms the writer had for these absentees.
Interpreting the text has been a year-long process for me. In sequencing the continuous stream of letters (no separation of words by spaces or marks) many possibilities have been tried, but I offer here what seems to be the best division of the words that I can envisage, beginning and ending at the point where Wayne French sees an oblique line, indicating the end of the sentence; and I take it to be a single statement about the contents and context of the bowl.
H.NN: the 'grace' root (as in the names Hanna and Johann).
ShMH.: the 'joy' and 'rejoice' root (Deuteronomy 16:14, "you shall rejoice in your feast"); in Hebrew this is written with Sin rather than Shin, but Phoenician writing did not make this distinction.
H.G: 'feast' or 'festival'. The H. is understood as serving for the final and first letter of the adjacent words: ShMH. (H.)G; or else it is an error of haplography.
'M: 'mother', here presumably referring to a goddess.
T.H.B: this looks like a scribal error for T.BH., the 'slaughter' word, and the noun having the meaning 'meat for a festival offering' (attested in Mishnaic Hebrew). If the following stroke is N, it could make the word plural; but -m would be expected, rather than Aramaic and Arabic -n, though this plural form is found in the Sinai inscriptions, in rb ns.bn, 'chief of the overseers'.
BH.LB: the L sign and the B are at point where a triangular piece has been glued back into place; they are the same as the subsequent LB (25, 26) but here the L is lower; this could be H.LB 'milk', with the preposition B 'in' or 'with'; or else  'the cream/fat', meaning 'the choicest', as in 'the best of the oil, wine, wheat' (Numbers 18:12).
WN: 'wine', and the w is an indication of the Bronze Age; wn also occurs in the Wadi el-Hol inscription (horizontal) in the phrase 'plenty of wine' (rb wn); it is found in its later form (w>y) as YN on the Beth-Shemesh ostracon (Iron Age I).
SB': the tipple root; here a noun, 'liquor', or possibly 'beer'; found as 'tippling' or 'carousing' on the Beth-Shemesh ostracon.
S.P: the reading is not certain but appropriate, meaning 'overflowing', as in 'he made the waters overflow them' (Deuteronomy 11:4).
LB`LT: 'to/for Ba`alat', that is,  the Lady of Byblos (B`LT GBL) who is known from Byblian inscriptions of Iron Age II; 'Ba`alat' appears frequently in the inscriptions of the Sinai turquoise mines in the Bronze Age (example, Sinai 345, votive sphinx: z nqy lb`lt, "this is my offering to the Lady", identified with the Egyptian goddess Hathor).

Notice that every word of this Phoenician text (including B`LT!) can be read with the aid of a Classical Hebrew dictionary, showing the closeness of the two West Semitic dialects or languages.

This artefact is now highlighted in the journal Damqatum 12.
http://bibliotecadigital.uca.edu.ar/repositorio/revistas/damqatum12.pdf
See pages 6-7, and footnote 13 on p. 19. 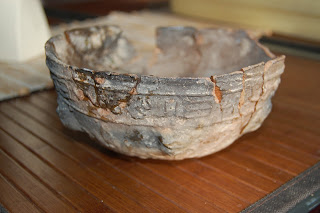 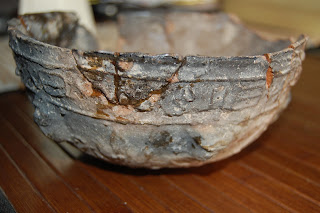 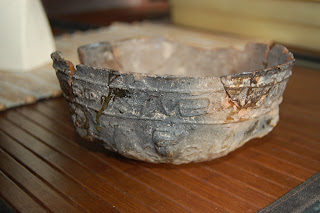 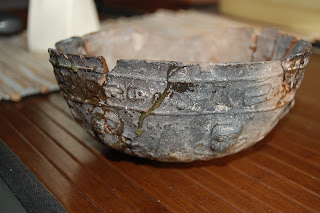 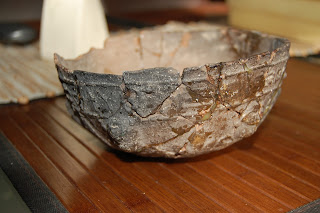 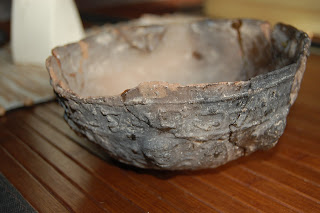 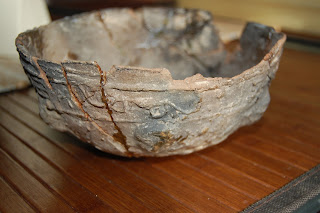