This is a supplement to CRETO-SEMITICA 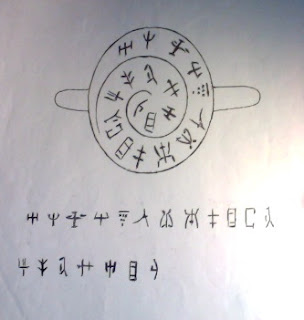 If this is a Semitic inscription, we need to remind ourselves that more than two dozen consonants have to be accommodated in the Linear A inventory with one dozen consonants.
Thus, R syllabograms cover R and L,  while S serves for a range of sibilant sounds (S S. Sh Th), and the gutturals have to be ignored in transcription; P includes B, K embraces G, and so on. Here am I trying to prove that most Linear A inscriptions are West Semitic,  and there are so many variables that my readings look illusory,  like confidence tricks. The words are not separated by spaces or marks, but here is an attempt to find some, and make a coherent statement out of them.
ARE  `al (The  `ayin guttural is ignored, the L is represented by R, and the final -e should be treated as a "dead" vowel) "upon, about, by"
NESI (Hebrew nasi') "prince, leader, ruler"
DI (WS d) "of"
SOPI (Hbr. s.aba') "host, army"
KEPAYATARI  (apparently lurking here is one of the names of Crete, that is, Kaptara, Egyptian Keftiu, Hebrew Kaphtor, named in the Bible as the previous home of the Philistians, and presumably also of the Kaptorians and Keretians; the YA in the middle is disconcerting; if it were misplaced from the end of the word it would produce an adjective, Kaptarian)

The Minoans who produced these inscriptions were West Semites; and somehow, they became Eteocretans (though this connection may be a modern mistake); they were really Neo-Cretans, and their genetic heritage may still linger in the population.
It seems to me that  some Linear A inscriptions are not Semitic, and an Anatolian language is present in them, and this is supported by personal names attested in documents (Margalit Finkelberg 1991, 79-84, L. Palmer 1965, Myceneans and Minoans)
Nanno Marinatos has produced a book (2010) in which she argues that “palatial Crete” (Bronze-Age Kaptar) belonged in the Near East, comprising Anatolia, Syria, the Levant, and Egypt. She quotes Evans at the head of her Introduction: “Throughout its course Minoan civilization continued to absorb elements from the Asiatic side”. Marinatos reminds us that Kothar, the West Semitic god of arts and crafts, had his abode in Kaptar (and he was also at home in Egyptian Memphis, as Ptah, and perhaps in Mesopotamia as Heyan, if that is Ea/Enki).  Accordingly, Marinatos proposes a religious koine of the Mediterranean world, and if Minoan religion was West Semitic, like the Minoan language, then she must be right. Deities and details of the religion have been set aside here, but there is no doubt that the West Semitic pantheon can be found in the Kaptarian documents.
The possibility that one person could handle all these writing systems seems preposterous, and so the reader may justly be suspicious of what has been presented here; but this is the summation of sixty years of research on the scripts of the Mediterranean world. My desire is to give notification of all this before my time is up, and try to move the material from my websites into permanent print.

Posted by Brian Colless at 4:50 AM

Hello Brian, I'm very impressed with your work.
In your post from 2007 Canaanite Syllabary:

"But the rear end of the presumed bee could be a separate character, an inverted Y, which is YI in the syllabary (from yimnu 'right hand'). The head of the bee might be human, and therefore RA (ra'ish 'head'), also alphabetic R . The Y might be BI (on its side), an eye with strokes radiating from it to depict teardrops (bikit 'weeping'). This view gives us RABI (as in Hebrew Rabbi): rab means 'great', 'much', 'chief'.

The possibilities are multiplying, and if the head is in fact attached to the horizontal stroke it becomes a rump with a tail (zanab), hence ZA, and a word for 'this'"

Now, I read this, and I recalled Brian Pellar's Astro-Alphabet, describing Taurus as Aleph & Beth, ox head + body & tail. But now I see it as Aleph & bee body & stinger.